Celebrating 50 years of production, the 2015 Ford Mustang has arrived, looking better than ever. This isn't just a sports car, it's an entirely new driving experience that has to be felt to be believed. Feel the thrill behind the wheel of the hard top, or let your hair blow in the wind while you drive down the highway in the 2015 Mustang Convertible. As of press time, Ford has yet to release the available 2015 Mustang trim levels.

In recognizing its 50th anniversary, this year's Mustang features the commemorative 'Mustang: Since - 1964' badge across the instrument panel. The 2015 Mustang comes equipped with advanced modern technology, including Intelligent Access with Push-Button Start. This means if you have your key on you, you can unlock the door and start the car without ever having to reach into your pocket. The all-new Ford Mustang features the available SYNC with MyFord Touch technology, the first time this advanced in-car communication system has been available in a Mustang. It adds a centre touch screen along with voice-activated control to the instrument cluster.

It's the details that really make the 2015 Ford Mustang shine. The cockpit strikes a balance between analogue dials and digital feedback, while the gear shifter has been placed in the optimum position to allow you to accelerate with ease. The 3-spoke tilt-and-telescoping steering wheel adds to the racecar feel. Available wheel options come in a range of sizes, including: 18-inch machined, 19-inch gloss, 19-inch premium, and 20-inch machined. The long sculpted hood and short rear deck make the 2015 version unmistakably Mustang. Other design highlights include a wider stance with a reduction in roof height, wider rear fenders and track, and sleeker profile. The three-dimensional, tri-bar tail lamps with sequential turn signals create a gorgeous accent to the lighting design, while the front end has been enhanced by the signature shark-bite front fascia and trapezoidal grille. 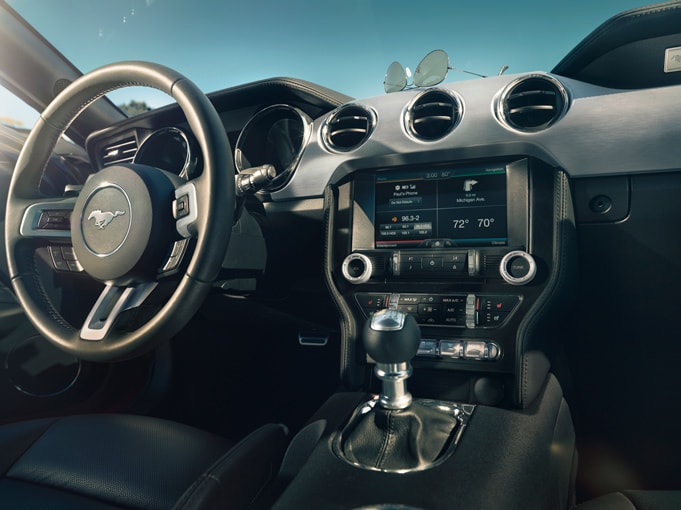 Under the hood of the 2015 Ford Mustang, there likes an updated 6-speed manual gearbox which makes for super smooth shifting. Meanwhile a reworked 6-speed automatic transmission features new steering wheel-mounted shift paddles for drivers who want the choice between convenience and control. Choose from three available powertrains including a 5.0L engine, 3.7L engine, and 2.3L EcoBoost.

Over its half century in existence, the Ford Mustang has brought home some distinctive accolades. Here are just some of the various industry accolades:

The 2015 Ford Mustang is as safe as it is sporty. Available safety features include:

The 2015 Ford Mustang celebrates it's 50th anniversary in style. You are sure to be impressed with what five decades of innovation and pure exhilaration can create. Find out what happens when they come together in a top-of-the-line driving machine. Contact your local Ford Dealer - Legacy Ford Rimbey for full details on when to expect the 2015 Ford Mustang's arrival.